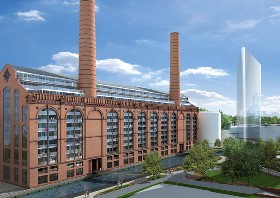 Construction work has started at the former power station, to become one of the largest residential developments on the north bank to create 706 homes, shops, restaurants, two public squares and three new bridges across Chelsea Creek.

Built in 1905 the historic Lots Road Power Station in Chelsea supplied power to London Underground up to 2001. Originally coal fired it used 700 tonnes of coal a day supplied to its own dock in Chelsea Creek off the Thames.

Since 2007 Aworth have worked and assisted with all the site’s various proposals, providing topographical, measured building surveys and hydrographical survey on the project.