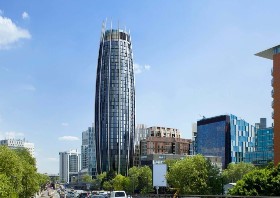 The Paddington ‘Cucumber’ gets the go-ahead

1 Merchant Square, a 42-storey building, often referred to as the ‘Cucumber’ – due to its shape – has been approved by Westminster City Council.  The tower is part of a development known as Merchant Square, which Aworth Survey Consultants has been involved with since its inception, working for our client European Land & Property.

Merchant Square is the final part of one of the UK's biggest regeneration programmes, at Paddington Canal Basin. The site occupies 1.3 hectares of fully managed mixed-use estate in London’s West End and is currently occupied by nearly 10,000 workers and residents.

Within the development, 1 Merchant Square is set to be a 149 metre skyscraper which will contain 209 luxury flats, a hotel and a double-height sky bar with 360-degree views

Aworth Survey Consultants has been on hand throughout the development of this project, assisting European Land with Land Registry compliant surveying services, topographical surveys, setting out, as-built surveys and visualisation surveys. Aworth has also provided legal mapping and asset management of the open spaces by producing detailed record mapping of surfacing and individual paving setts.