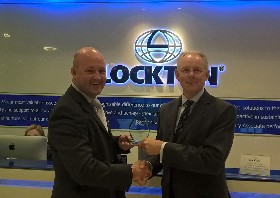 John Witherden was recently presented with the President’s Award for his outstanding contribution to the success of the TSA. John was a member of the governing Council of the UK Survey Association for 16 years and his guidance and judgement will be missed.

The trophy was presented by Chris Lennon, Head of Lockton’s Bristol Office who sponsor the award and in addition to the trophy, Lockton are donating the sum of £100 to John’s chosen charity, Hospice in the Weald.