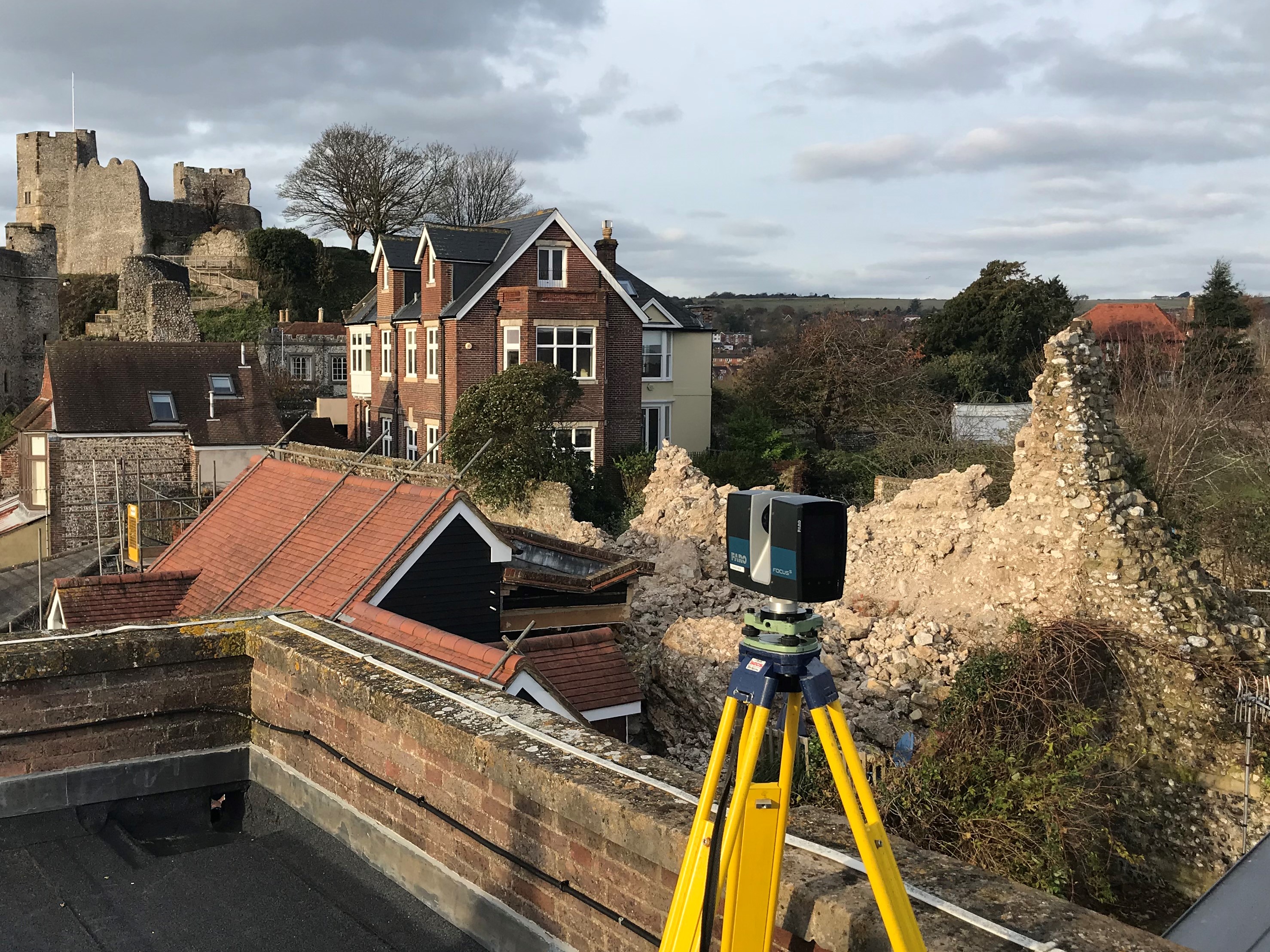 Aworth Survey Consultants is based in Uckfield, East Sussex, close to the historic town of Lewes which is dominated by its 11th century castle. We were saddened then to learn that a boundary wall of the historic castle had collapsed in November. With no apparent warning, around 600 tonnes of rubble had fallen from the structure into the neighbouring properties. Thankfully, nobody was injured.

Lewes Castle can trace its history back to 1067, when work on it was commenced by William de Warenne, a Norman baron, who intended the structure to dominate and control the Saxon settlement and port. This initial castle was an earth and timber motte-and-bailey fortification.

Around 1100 the castle was rebuilt in stone and a second motte was added. This new motte supported the shell Keep, part of which remains visible today, while a large gatehouse was also built to replace the former timber gateway into the bailey. Further modifications were made to the castle in the 13th century, with two towers being added to the main shell Keep.

In 1334 a Royal grant was awarded to fund repairs to the town walls and around 1336 the castle's defences were enhanced by construction of a barbican. During the 15th century and beyond the castle declined in importance. The Keep underwent a series of modifications during the 18th and 19th centuries, with its tower refitted and the interior converted into a ‘pleasure garden’.

We are often called in to provide specialist support at the site of historic buildings, whether during regeneration or to simply monitor any movement. In the past, we’ve surveyed projects including The Cutty Sark, the loading towers at Tilbury Docks, and structures and refurbishment/construction projects while under redevelopment, including One Crown Place in London. Currently one of our engineers is paying a weekly visit to HM Prison Pentonville in London, where we are monitoring movement in the old gate houses.

We received a call soon after the wall collapse in Lewes to see if we could survey the site before the rubble was removed, to record exactly where the various stones had fallen. We were able to send a surveyor to site very promptly and surveyed, by laser scanning to a 6mm density – to capture each individual stone. We not only surveyed the site from the ground but also received permission to monitor it from the roof of the nearby County Court in Lewes.

“We were called in to carry out a laser scan survey of the site due to our experience and expertise in this area and we were able to get there quickly before the rubble was removed – which will be important for any investigations about why the wall collapsed as it did,” says John Witherden, Managing Director at Aworth Survey Consultants. “While it was upsetting to see this historic wall collapsed, it was amazing to think we were looking at stonework which nobody had seen for nearly a thousand years.”