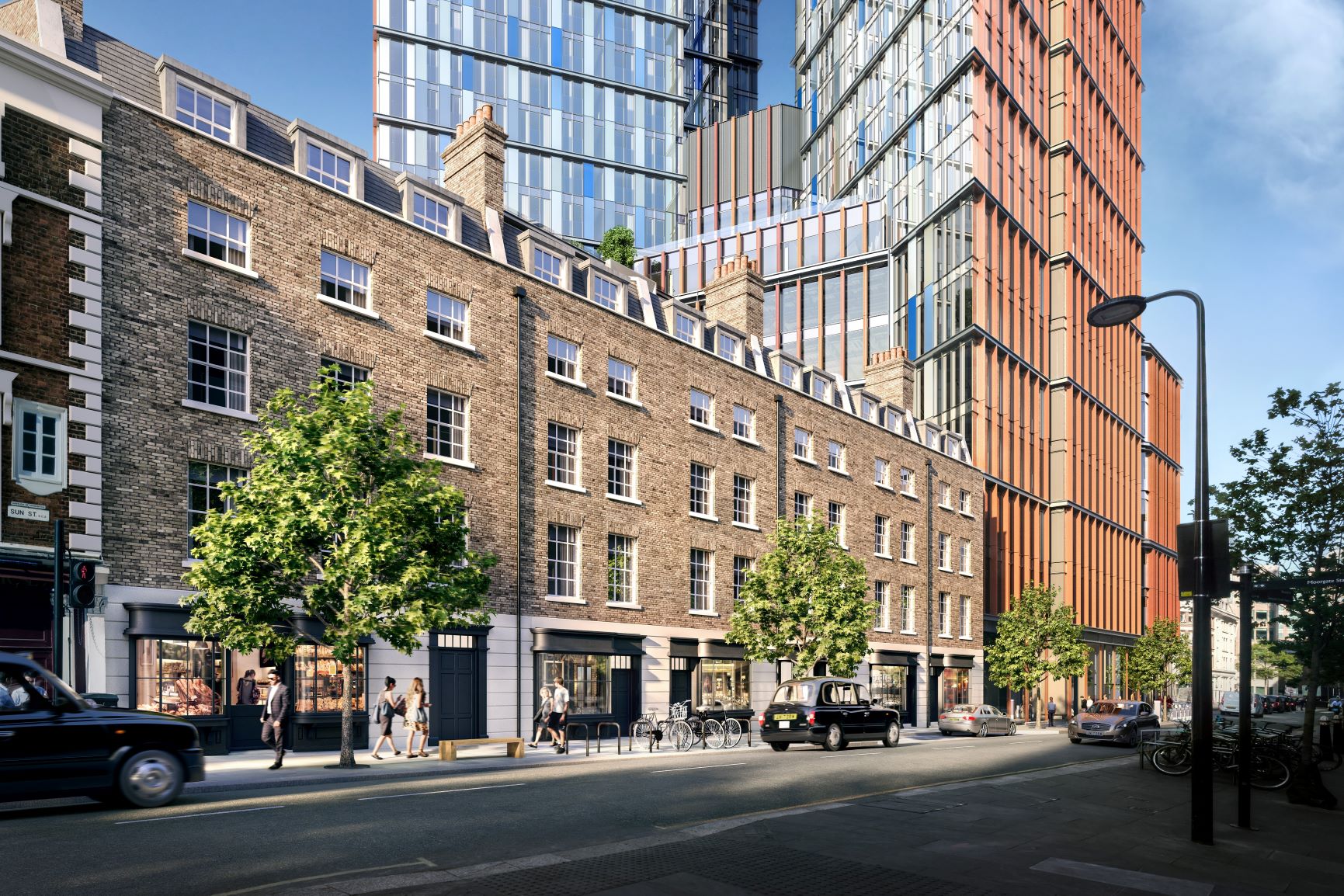 Keeping a watch on Sun Street

Aworth Survey Consultants has been involved with the One Crown Place and Sun Street Terraces project since 2006, so it is exciting to see the development moving forward.

The steel and concrete frame of the building is now complete up to level 12 in both the North and South towers. One of the most striking elements of the construction so far is the installation of the steel trusses on the seventh and eighth floors, which support the residential towers above.

One Crown Place is a mixed-use project comprising of two residential towers (32 storeys), sitting on a podium block of offices, amenity space and retail units. The Victorian warehouse façade to the north, listed chapel to the west and Georgian terraces – Sun Street - to the south are integrated into the master scheme.

We remain actively involved in the project, including setting-out precise grids for the building. We have also produced BIM Revit models and HD Laser Scanning of the retained facades and provided the UAV drone survey control for Mace (the appointed consultant) to deliver the pre-construction services.

While a vast part of the project is new-build and ultra-modern, the site will also incorporate the façade of a Georgian terrace on Sun Street – which were originally townhouses and elegant shop fronts. These will be converted into a 41-room boutique hotel, restaurant and members’ club. It’s also planned that the space will include a deli, café and art gallery in the lobby.

The original Sun Street terrace was designed by renowned architect, surveyor and portraitist, George Dance the younger. He was fifth son of the architect George Dance (the elder) and came from a family of architects, artists and dramatists.  He was described by Sir John Summerson as ‘among the few really outstanding architects of the century’.

His first major public works were the rebuilding of Newgate Prison in 1770 and building the front of the Guildhall. Other London works of his include the rebuilding of the Church of St Bartholomew the Less (1793), a former chapel within the precincts of Barts Hospital.

The tall and elegant terrace in Sun Street was designed in the 1810s as part of the development by the City Corporation of Moorfields, which resulted in the creation of Finsbury Square and Finsbury Circus - one of the most significant urban developments of the late 18th-century.

From the outset, the decision was made to preserve the Sun Street terrace and integrate it into the new development. This saw our skills further called upon in 2009 to continue to monitor the listed facades and basement walls for the project and development manager, CBRE.

With extensive building works occurring so close to Sun Street – as well as refurbishment to the terrace itself - it has been key to keep an eye on whether this was having an effect on the integrity of the structure.

At Aworth Survey Consultants, our expertise in deformation or movement monitoring is extensive, with past projects including maritime heritage ship The Cutty Sark and loading towers at Tilbury Docks.

With buildings and structures on or near construction sites or excavation works susceptible to settlement or excess movement, deformation surveys measure the rate of this displacement. This saw our experts regularly visiting Sun Street to take readings.

While we are often called in to provide this support to large commercial projects, our movement monitoring services can equally be applied to domestic projects. This is most commonly the case where residents look to extend their properties by digging into the basement and there are connected or nearby properties which might experience movement. We are brought in at the beginning of the project and can monitor any movement.