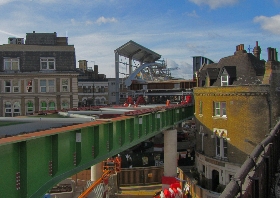 The new landmark bridge at Borough Viaduct, due to be completed in late 2012 and part of the £6 billion project Thameslink Programme is based upon Aworth survey data. In 2002 when the initial proposals began under the Thameslink 2000 branding, Aworth Survey Consultants were commissioned by Skanska to provide accurate topographical and measured building surveys for the project.

Aworth delivered comprehensive topographical and underground services surveys for the entire project, and in addition provided detailed measured building surveys of all the properties along the new viaduct’s route.