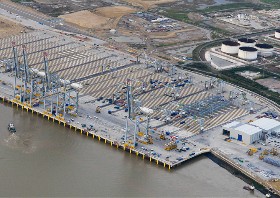 The deep-water container port is equipped with a vast 2,700m quay and six berths, serviced by the world’s tallest quay cranes at 137m. The DP World port will be the UK's second largest when fully operational and will be capable of accommodating the largest cargo ships in the world.